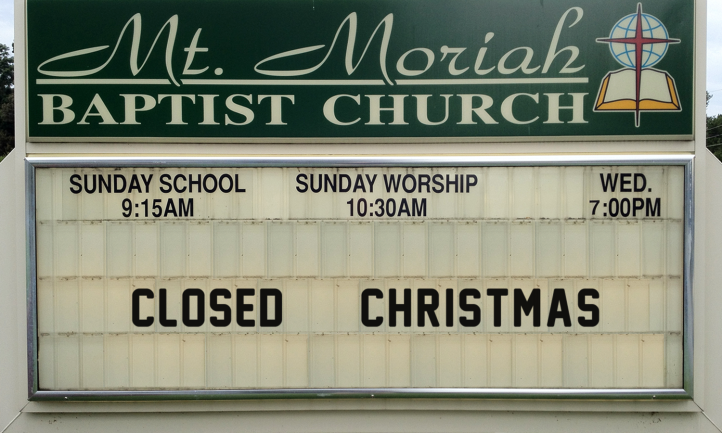 My kids got in a little trouble the other day. Some others asked what we were doing on Christmas and they answered, “going to church. We don’t want it to get in the way of dedicating the Lord’s Day to God.” That wouldn’t usually be a bad answer but the cultural shift of the times has made it an awkward answer. Other kids thought it was kind of a sad answer, or at least confused. The purpose of going to church was to get to Christmas. If church gets in the way of Christmas – something must go. Few of them were even going to church on that day even though it’s Sunday.

We live in the midst of a vast, worldwide cultural embrace of Christmas as a somewhat religious holy-day. It’s a strange quirk of history. Things like this haven’t generally happened before. It’s not like people in China, Zimbabwe and Istanbul were celebrating Christmas hundreds of years ago. The advent of Christmas (pun intended) as a world wide super power is a pretty recent event.

With that, it’s relation to the true faith and practice of the church has been complicated. Many kinds of Protestants avoid it entirely as false religion. There were times in England and the pre-American experience when the practice of Christmas was illegal. That might be surprising to some who think it to be a subversive plot of the Christians against the secular age. Their understanding was that there isn’t anything in the Bible or the common faith that implies that we are supposed to have a Christmas.

But they weren’t talking about Santa Claus. Red-nosed reindeer had not yet been invented and elves hadn’t obtained god like prerogatives. They had never thought about it someday holding claim to 1/8 of the largest economy in the world. Black Friday was never a concern. And in ages where vast sermons, weighty theology and deep religious reflection were common every day occurrences the idea of needing a day to remember Jesus – never came up. Christmas wasn’t a benefit, it was rather a confusing burden. It was viewed as theological liberalism, superstition and if you can believe this… idolatry.

Now what we do with Christmas today isn’t really what they were avoiding in their time. It’s largely a cultural phenomenon with various shades of religious interest. Egg Nog and office parties are more a part of it than worship. You tend to get a few days off from work. And families tend to hunker down, avoid the cold, light a roaring fire and eat until they need a New Year’s resolution. As the church, as the people of God, we have a zeal for the communication of Christ and his Gospel and the general consensus that Christmas has something to do with Christ can be a pretty good avenue to telling someone the good news.

But Sunday is a really big day to Christian faith and practice. It’s not a light thing to say we would “cancel church”. Really, as ministers of Christ, church is a large part of what we do, and Sunday is the day we do it. It’s not that we don’t serve God with gladness every day but Sunday is a special day. You could say that we celebrate Christmas once a week.

The other things is that there’s a difference between God letting us know to keep a day holy and us making up a holy day of our own. It’s not like ours are better than his just because we have holly and mistletoe. Some have said about Christmas, “but it’s a day about being with family and the people you love.” and yes maybe it is, but really, Sunday is about more than being with family and the people you love, it’s about being with God. It’s one day, one very special day, set apart as a truly Holy Day. Sunday isn’t reducible to love for other people even if love for other people is an expression of the day, it’s about the honor and worship and praise of the living God – and everything that comes with that. That’s what makes us happy and brings us that irrepressible joy. It’s what we were made to do and fulfills our true purpose for being alive. It chases away fear and doubt and bring that longing for peace with all men. Chestnuts roasting by an open fire won’t do that for you.

Is what you’re about to read shameful? Or practical? Biblical? Or cultural? Maybe it’s just easy, or shrewd according to the world we live in? Or a thoughtful response to a lightly religious American culture?

“….This year is special since Christmas Day falls on a Sunday. The network of executive pastors with whom I am involved, has been “a buzz” with questions about plans for this coming Christmas weekend.

We might think, “But look at all of those services! How could that be wrong?” But a lot of people going to church a lot of times isn’t really the goal of Christian ministry. If we compromise the holiness of the event by replacing it with a human tradition, what we were trying to achieve will lose its meaning. In other words, if we cancel church for Christmas what kind of Christmas could that be?

The idea of canceling the Christian Sabbath for the sake of religious Holy Days of questionable content isn’t a new thing. Tradition has been trumping Jesus since the writing of the New Testament. Jesus said, “you nullify the word of God by the tradition you have handed down. And you do so in many ways.” We tend to think our way is better than his way and a lot of the Bible is about that problem.

Now this isn’t to say that children can’t have christmas presents, packages and bows; hot chocolate, pretty lights and and ancient hymns of the birth of the christ child; caroling and hay rides, peppermint sticks and shopping malls filled with smiling faces. These are aspects of the western culture that have developed along with the progress of the church but just as much apart from it. Everything “Christian” is not always very Christian. Nobody sees that better than perhaps, Christians. Religion is a general good but bad religion isn’t doing much good for anyone and bad christian religious expression and application has been a problem since the days of David and Elijah. The religious sentiment they contended with was very “Jewish” in looking toward the Messiah but then not so Jewish. The Bible is thick with poor expressions of true religion. This is to say that just because it has Jesus in it (even a lot of Jesus) doesn’t mean that it’s good for the soul.

Santa might have been a Saint when he was Saint Nicholas of the Ancient Near East but Rudolf and Frosty the snowman are consumerism and salesmanship. Sure, they’ve been turned into nice stories of magic and moralism but most of these things became staples as promotional programs for major brands. They were advertising. There was something to sell and that something was in need of an audience. But there is a limit to those pleasures of the world and the ways that we might see them as a benefit (generally, things aren’t bad in themselves but it depends upon how we use them).

Christmas itself, in so far as it has an echo of a witness for Christ, reminds them of their historical roots, brings them to churches, carols and the “reason for the season” can all serve a good subsidiary purpose. But should these measures supplant the witness of the true church in history – should they ever be perceived as pure religion in themselves – they’ve become destructive of those ends they hoped to increase; these being hope, faith and love.

We could do a lot worse than have the entire world turn it’s ear to Christ and the glories of the incarnation for a week or two each year, even if just in nostalgia and the echoes of a faith they have since forgotten. Being reminded is always good.

The Apostle Paul wrote about things like Christmas, “Therefore let us no longer pass judgment on one another, but rather determine not to put a stumbling block or an obstacle in a brother’s way. I know and am persuaded by the Lord Jesus that nothing is unclean in itself, but to him who considers anything to be unclean, to him it is unclean.”

But still, the Apostle did not intend that the true worship of the true God be included in the things to be lightly overlooked when the people of God differ over this and that accoutrement of worship. We could no sooner dispense with the divine ordinations against adultery and stealing than the regulation of the Lord’s Day as a duty of every Christian soul. Remember, God didn’t give us the day because He needed one but as a gracious and enduring gift according to our need. If he thinks we need it, it might be from unwise to unsafe to go around canceling upon the ground of mere human wisdom.

We could think of canceling church on Sunday as a sort of canceling the real Christmas for the sake of the gimmick of Christmas. It becomes all baubles, and nogs and cyber-monday sales. All of the soul is swept out and replaced by sentiment, consumption and mere human reason. It’s replacing faith with science, hope with strategy and love with community. The Christmas that happens in the living room replacing the Christmas that happen in the heart. The worship of the child in Bethlehem for the promotional creche in the shopping mall.

Canceling Sunday is canceling Christmas in the most real and substantial way. It’s like that first time we pass on getting the real tree – with the sharp smell of pine and sticky sap on our fingers, for the hard aluminum clank of an artificial replacement – screws and bolts – all shadow without form.

It has all the makings Scrooge and bah humbug.

The Latest from ChristianTheology Blog